Tennis runs in our blood.
Key Facts
Our Mission
In 1998, the founders of Tennis Point - Christian Miele and Thomas Welle - wanted to equip their tennis students in Münster with the right tennis equipment. This idea evolved from year to year, little by little, to become Europe's largest supplier of tennis equipment. Today, Tennis-Point has a wide, up-to-date range of more than 100,000 products and ships up to 5,000 parcels per day across Europe. "We know the needs of our customers very well, after all we are tennis players ourselves. Our mission is to improve every customer's game and to further promote tennis, "said Christian Miele. Tennis-Point is now much more than "just" a shop: Tennis-Point is the point of contact for strong customer care, the latest news, tennis travel and events related to tennis.
1999 - 2001
All beginnings are difficult 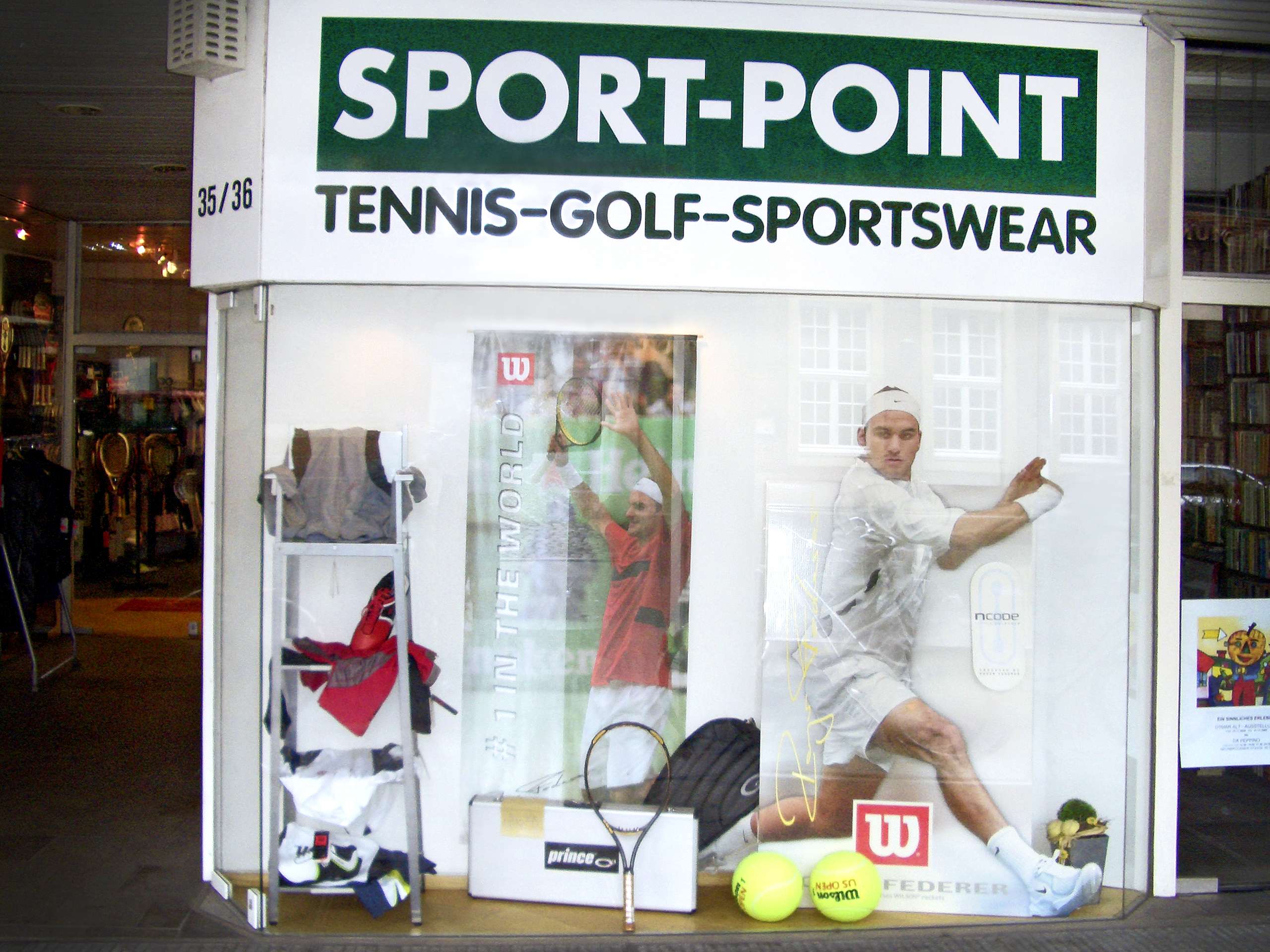 In the beginning Christian Miele and Thomas Welle financed their studies through tennis training and founded a tennis school in 1998. As tennis coaches, they were often asked for the right equipment and further advice. As a result they decided to do what they did best and what they enjoyed most.

They made the decision to become self-employed and fulfilled their dream to open a sports shop that was pure tennis. In 1998, a 32m² small tennis shop opened on Steinfurter Straße in Münster. During this time Philipp Tippkemper was in the middle of his studies. However, he found the tennis business of his trainer, Christian Miele, much more challenging and started to work with him.
2002 - 2006
First steps
In 2002, Welle & Miele GbR took over the family-run sports boutique Weikert, whose owners could no longer manage the business for reasons of age. There was a 200m ² large sports shop, located Hörster Street, with a specialization in tennis and golf, that became well known in Münster after short time. The business and storage rooms were too small and the customers increased rapidly. "However, we could not make a living on our business at that time. Besides running the store we gave training and alternated in the shop. Moreover, we opened a bowling center in 2004, which gave us more capital for the tennis business. "(Christian Miele)

In 2006, the company moved on to the Alte Fischmarkt. The new 50m² sports shop for fun sports with a focus on tennis was close to the Lambertikirche in the city center of Münster. "At that time we asked ourselves where the journey should go and how the market will develop. We often sat at the counter in the bowling center and developed new ideas, almost brainstorming. "(Laughs Christian Miele)

"We were sure that the future success was an online shop. "(Christian Miele)
2007
Go Online 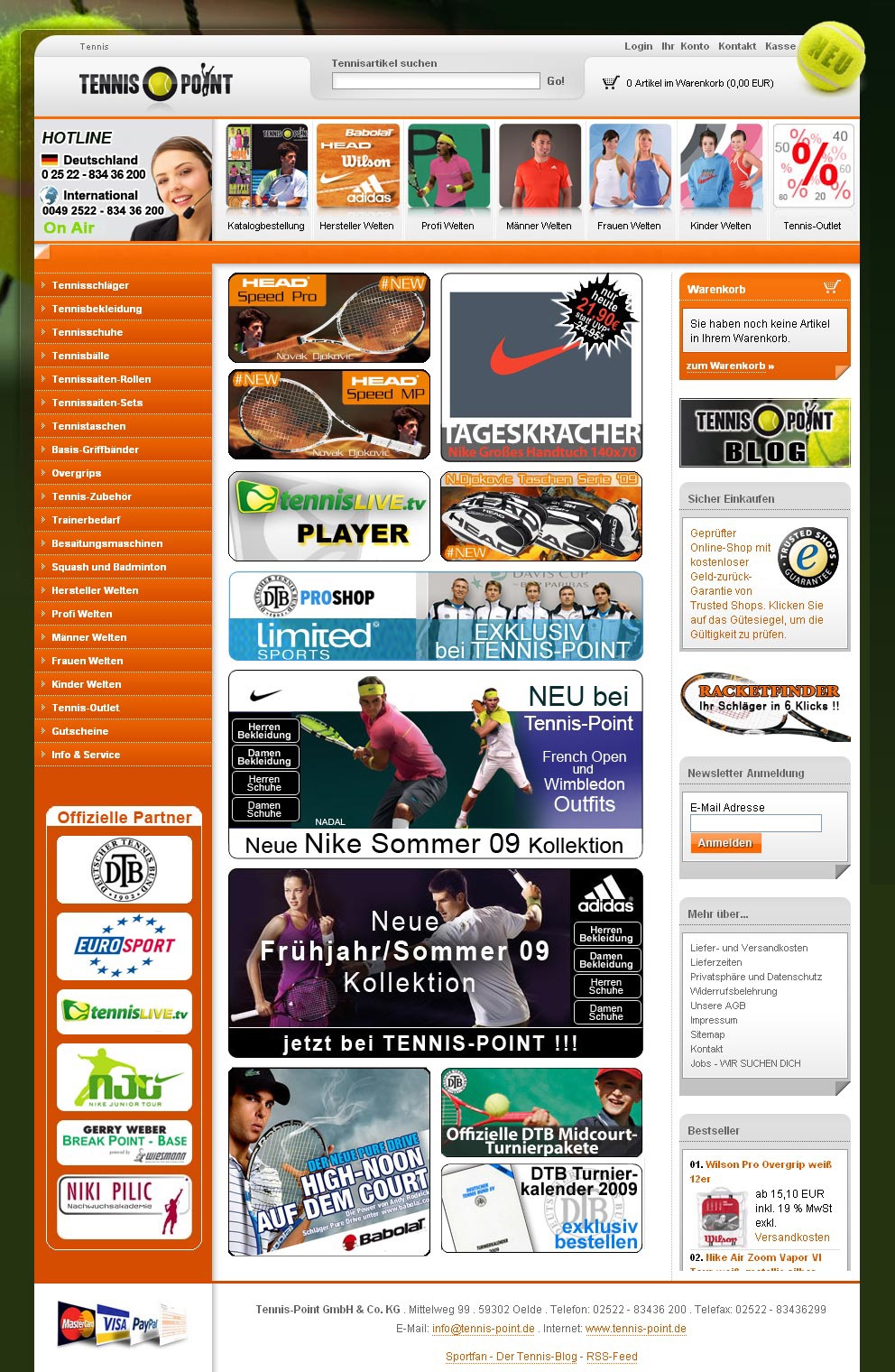 In 2007 the company Tennis-Point GmbH & Co. KG was founded. Maik Langenberg, a tennis buddy from the past, and Philipp Tippkemper joined the company as managing partners. "Maik was responsible for IT and logistics, and Phillip took responsibility for the online business. We have had different skills and talents and have complemented each other well, which has greatly contributed to our success. At that time, we had so much to do. We had to run the bowling center, work in the shop and manage our online shop. "(Christian Miele)

"The biggest problem was that everything was a manual process. Philipp photographed all products with a camera, uploaded photos to the online shop and sold them. It has sometimes happened that we fell asleep during lunch breaks or left the door open. "(Christian Miele)
2008
First catalogue & TV Spot at Eurosport
"In 2008 we also created our first catalogue with the provocative cover " Arsch Geil ". On the cover is the butt of a waitress from the bowling center in a short red tennis skirt. We received a lot of criticism and were called by a Catholic pastor who called us "pornographic". Never-theless, it was important for us to stay creative and to trust things that other companies did not dare at that time. "(Christian Miele) 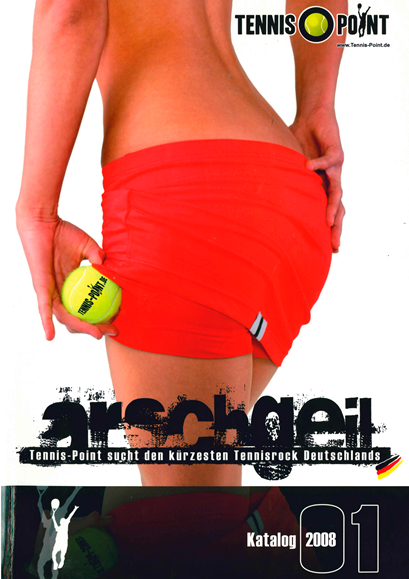 "At the Australian Open 2008 we called Eurosport at 3 o'clock in the morning and introduced our idea. We were the first online shop advertising on TV, even before Zalando did. At 11 o'clock in the evening the spot should run. We bought a bottle of sparkling wine and went to Christian's home to watch the spot. We were very excited. A few minutes after the spot was broadcasted, the site was no longer online. The huge number of visitors overburdened it.

We soon realized that we needed to expand our server capacity. “Next, we worked even harder to become a professional online shop.”"(Philipp Tippkemper) "In that year we moved to Oelde into a 300m ² large warehouse. We worked every night until 1 o'clock in the office and each one of us did every job: we answered the phone, put on rackets and worked in the store. "(Christian Miele)
2009 - 2010
New Partners & Relaunch of the Webshop 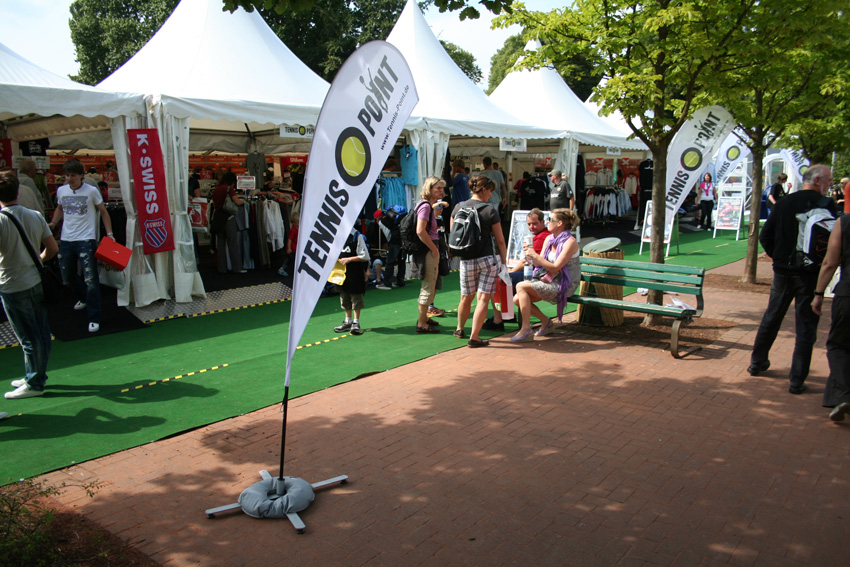 With the ARAG World Team Cup in Dusseldorf, the Weissenhof in Stuttgart and the German Open at Rothenbaum in Hamburg, Tennis-Point was able to accompany and organize further tournaments in 2009. Furthermore, Tennis Point became partner of the DTB (German Tennis Association), the WTV (Westphalian Tennis Association) and the Hamburg Tennis Association. In Muenster on Friedrich - Ebert - Strasse, Germany 's largest sports shop, which specialized exclusively in tennis, was built with 330 m².

In 2010, Tennis-Point expanded its shipping performance, among other things, by expanding the warehouse and its infrastructure. In order to make shopping on www.tennis-point.de even faster and easier, a relaunch of the webshop took place. Moreover, in this year Tennis-Point launched it`s Facebook page, as well as its own Youtube channel to provide tennis enthusiasts a platform to exchange with other tennis players.
2011
Award for the online shop of the year 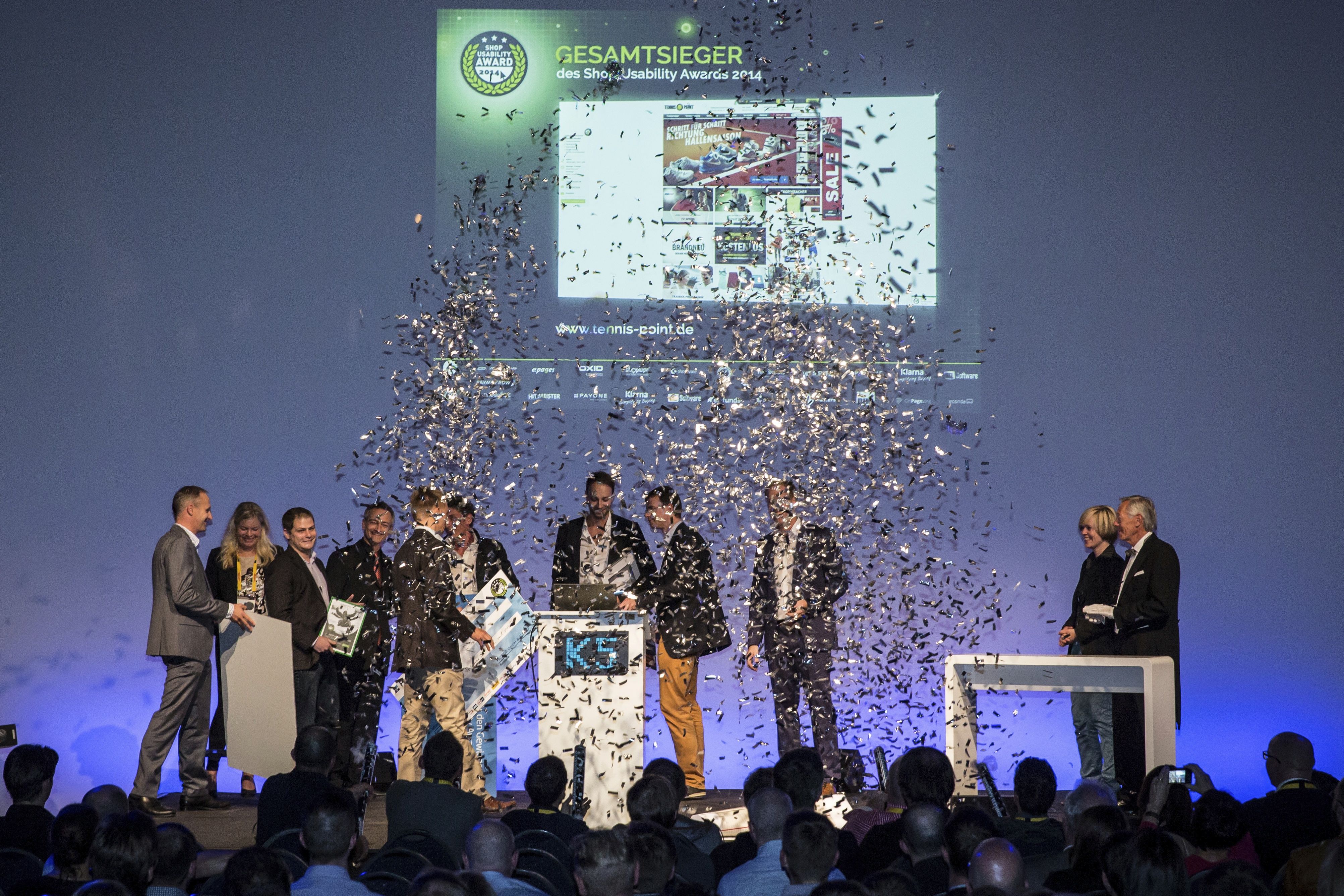 Tennis-Point is voted the Best Tennis Online Shop 2011 by the readers of the Tennis Magazine. In addition, Tennis Point is named Online Shop of the Year at the German Mail Order Congress.

The specialist for tennis equipment prevailed against ten other nominees following previous winners such as hagebau.de, fahrrad.de or otto.de. The award enjoys the reputation of the "Oscars" of the online and mail order industry.

Further stores in Berlin and Hamburg opened and offer everything the tennis player's heart desires.
2012
Moving to Herzebrock 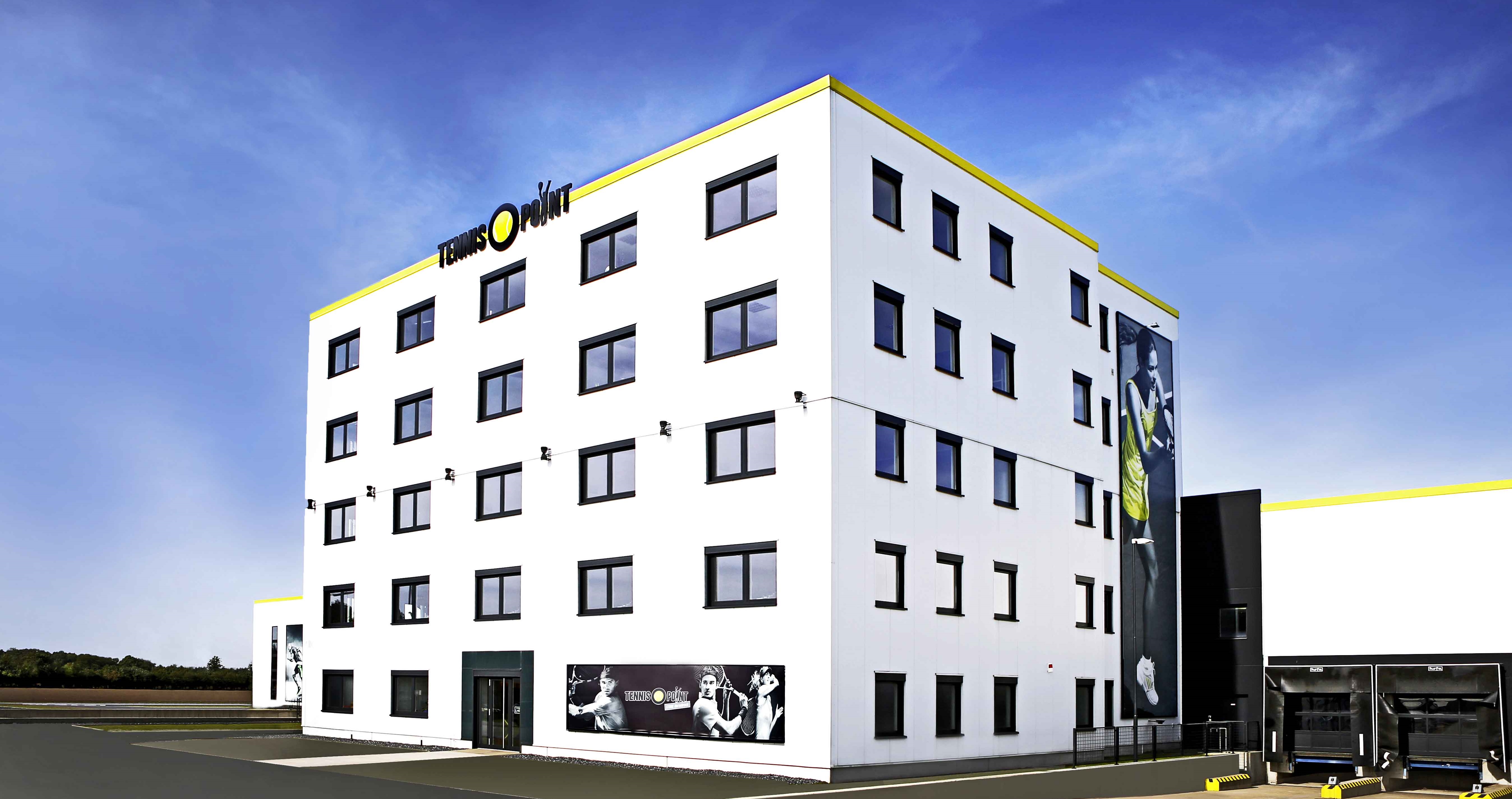 Tennis-Point moved to Herzebrock in a building with 2000m² office space and 8000m² storage area and opened three more shops in Hamburg, Graz and Herzebrock.

In addition, jogging-point.com was launched in order to be able to offer customers the right equipment.
2013 - 2015 more Logistics-Power & Usability 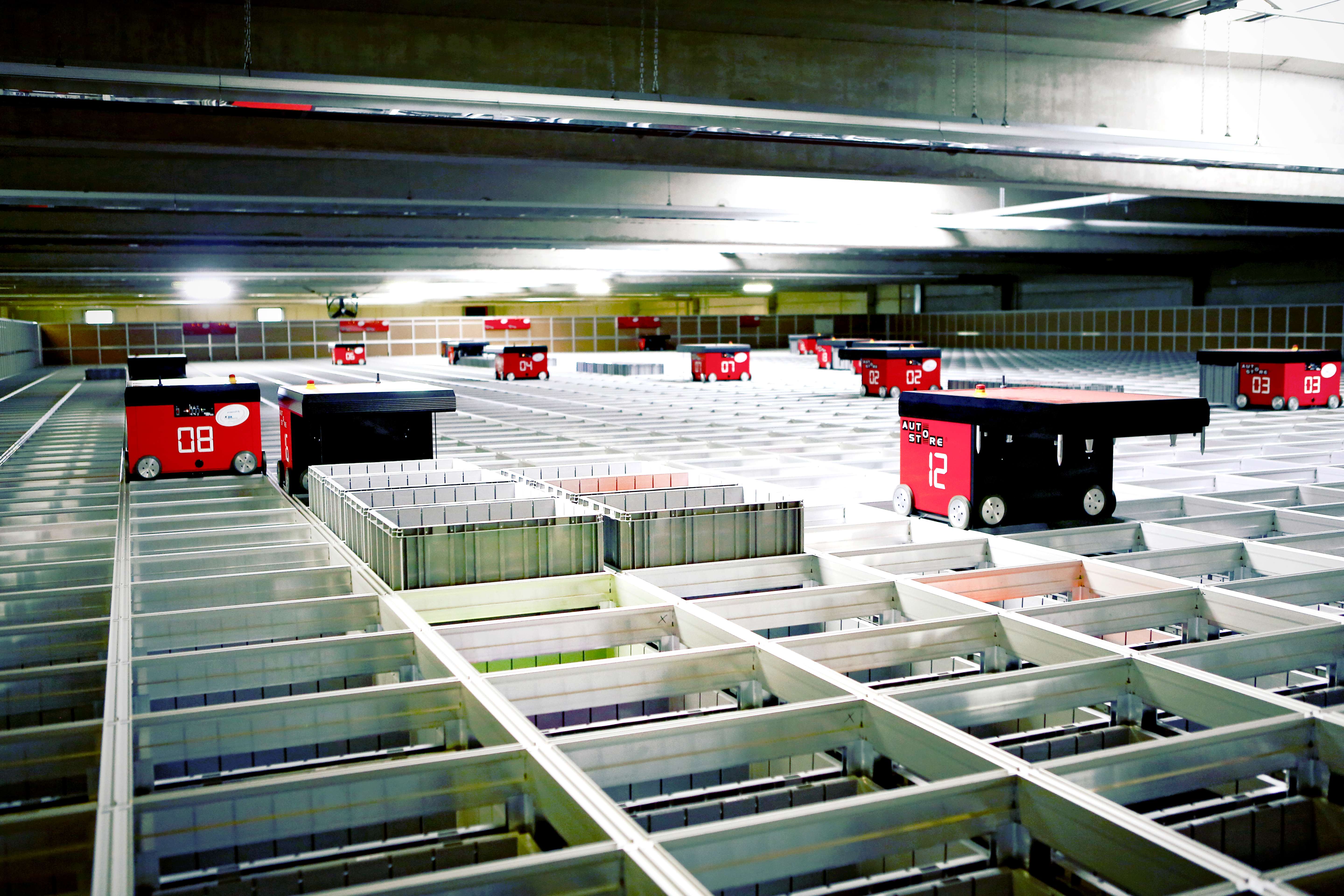 Key to the rapid growth was the "Auto Store system" with 22 robots, which automatically sorted the inventory 20 hours a day at the new location. "Automated logistics is our core". (Christian Miele) 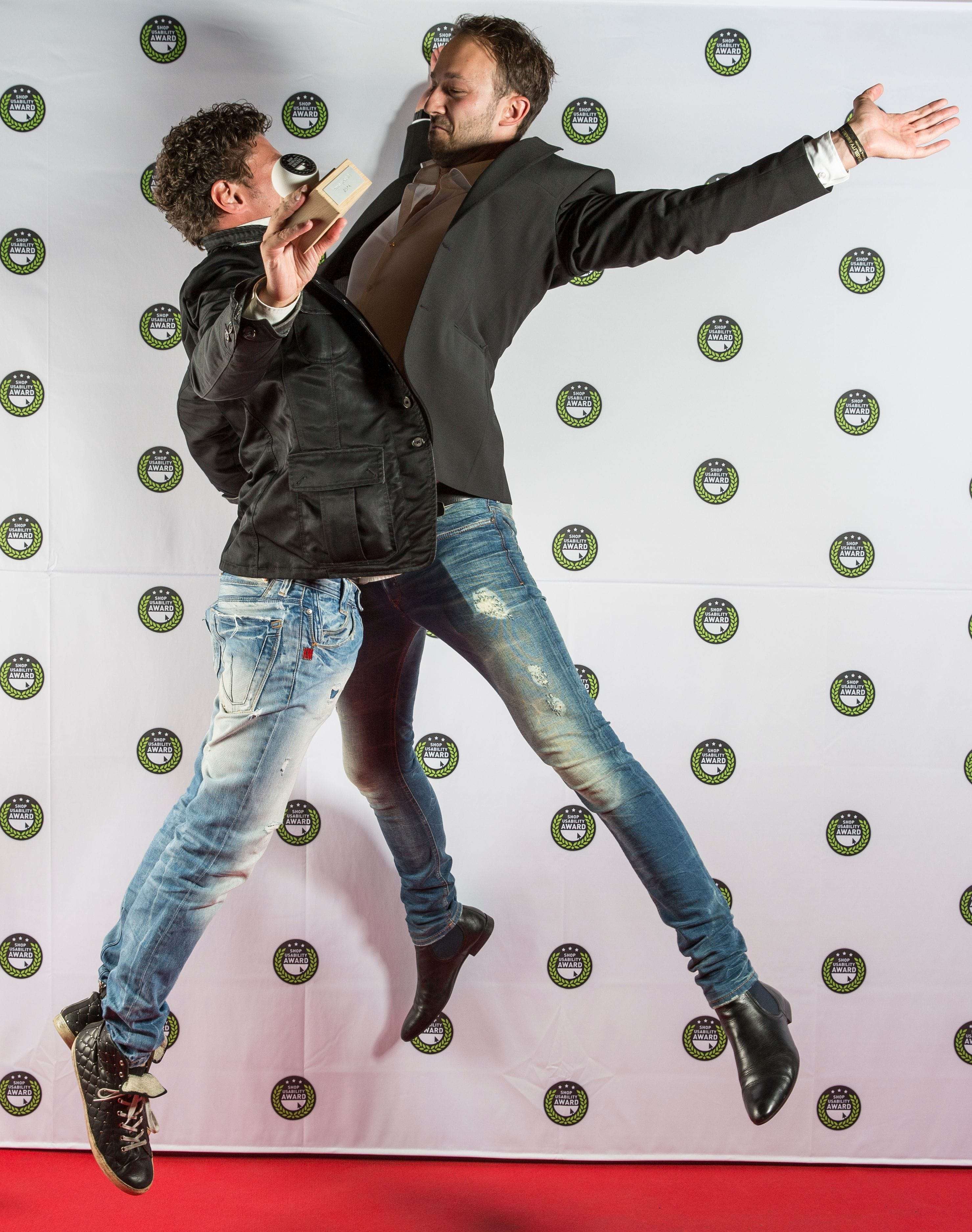 In 2014, Tennis-Point was crowned with the most prestigious and important eCommerce award in Germany, the "Shop Usability Award". This was the confirmation that we provide with our creativity, our commitment and dedication a user-friendly shopping experience in our online store.
2016  Tennis, Padel & more 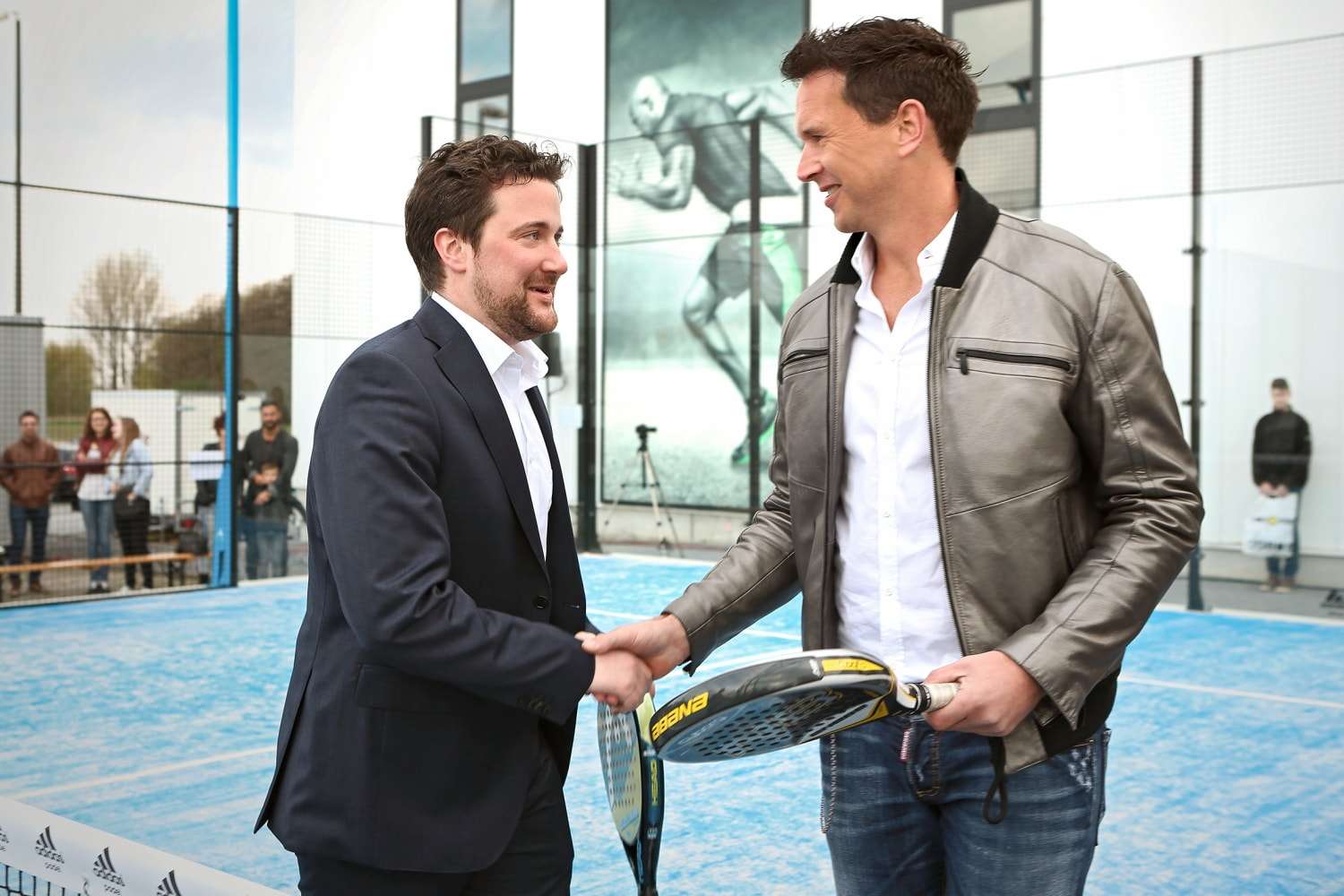 In 2015, Tennis-Point expanded its store network and stores were established in Cologne and Vienna. One year later, the openings of the stores in Frankfurt, Stuttgart and Munich followed.

"In 2016 we discovered our love for the Padel and built a „Padelplatz“ for our employees and customers. It was enthusiastically accepted by our tennis enthusiasts and there are often small tournaments taking place in and between the different departments. "(Christian Miele)
2017 Even bigger and stronger 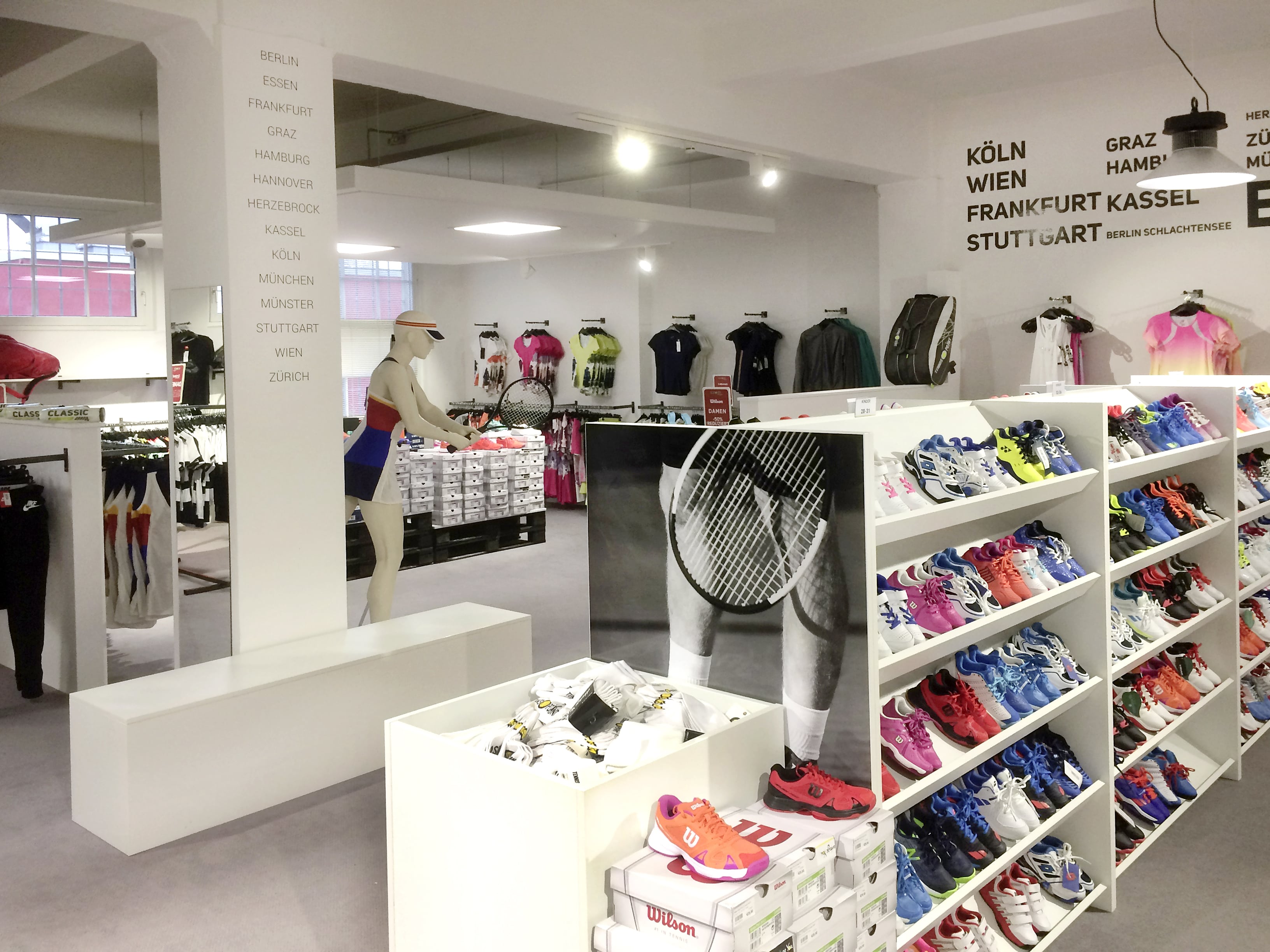 Tennis-Point became part of the Austrian real estate and trading company Signa Holding GmbH. "Thus, we have brought a strong partner to our side, from whose extensive retail expertise we can learn." (Christian Miele) Furthermore, the Tennis-Point team was strengthened this year by two experienced businessmen - Sascha Beyer and Christian Singer. With over 20 years of experience in the IT industry and expertise in security and Internet business, Sascha Beyer has been Managing Director of the Executive Team since September 2017. Christian Singer will focus on advancing international strategy in his future role as General Manager International as well as the DACH region.

To get even closer to our customers, the world's largest tennis shop with around 1500 m² was recently opened in January 2018 in Essen-Kray. "We know that consulting, trying out the new tennis shoes and tennis apparel is very important to many tennis players. With our largest branch in Essen, our customers experience pure tennis on an area of about 5 tennis courts. "(Christian Miele)
2018  MEHR TENNIS. MEHR SONNE. MEHR URLAUB. 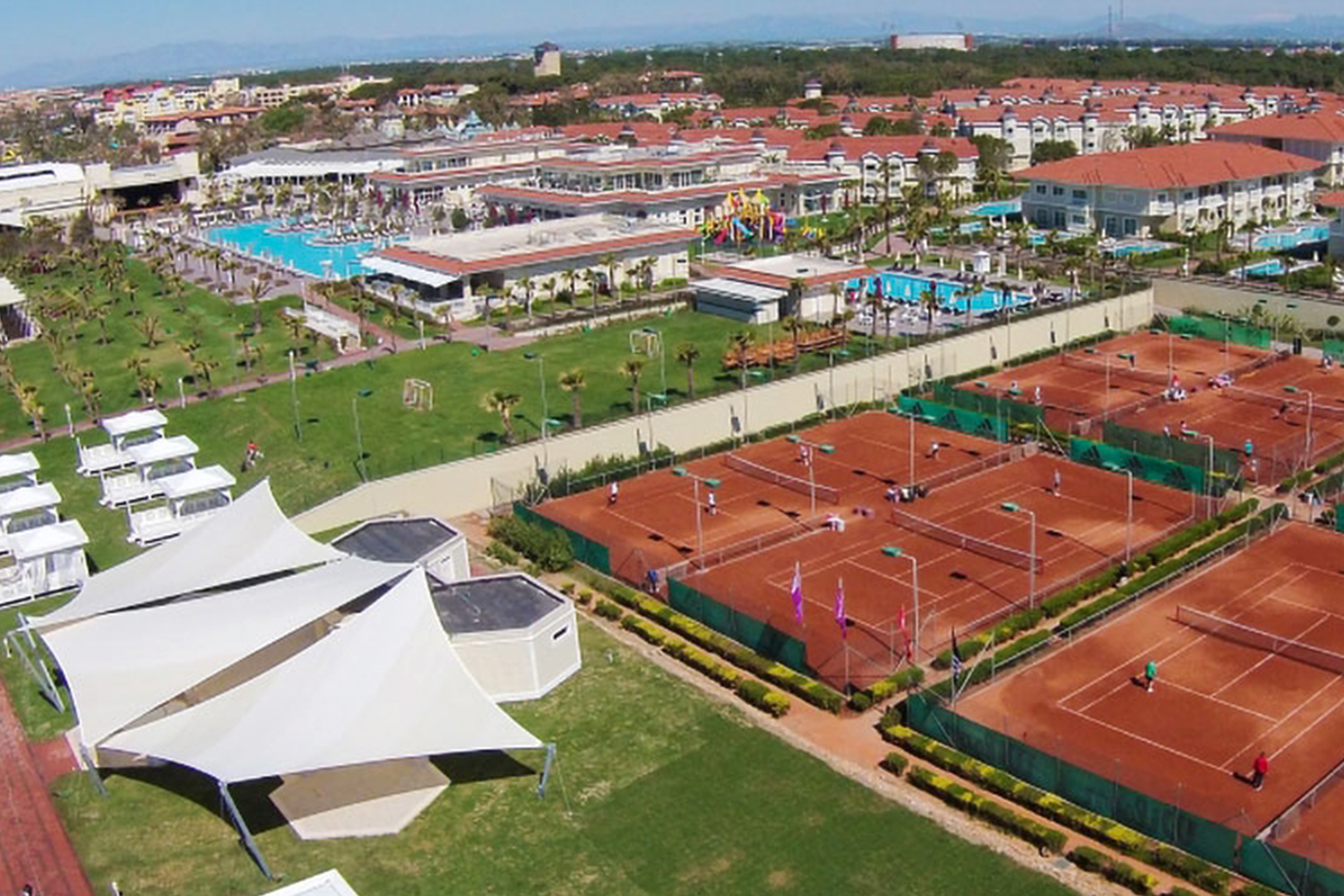 Patricio Travel provides you with the best conditions you are used to: Top sand pitches, exclusive accommodation in the most beautiful places, long sandy beaches, sun and party - all inclusive, no matter whether you arrive as single, as a team, with or without your trainer.
Privacy Imprint